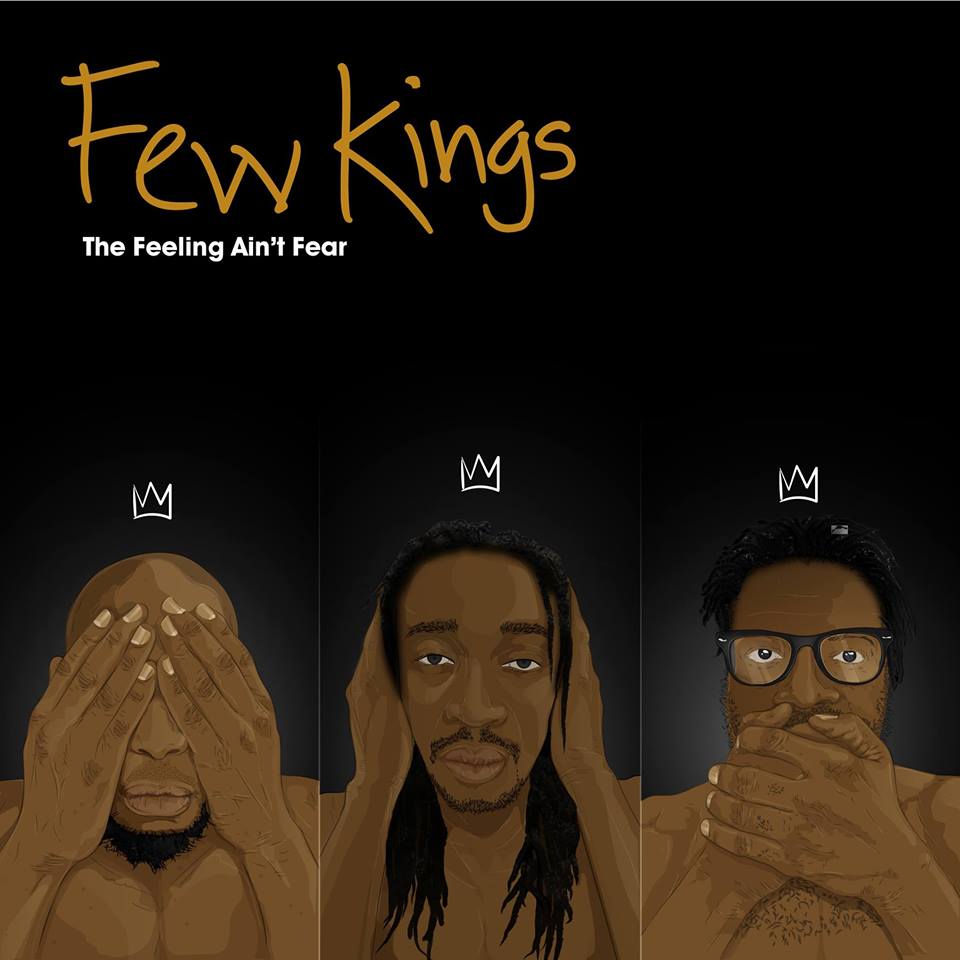 After a four year hiatus and discrete solo efforts, the Harare troika Few Kings returns again with yet another body of work entitled The Feeling Ain’t Fear.

Comprising of thirteen tracks, it is Few Kings and hip-hop as we’ve known and come to appreciate both.

The music is a wondrous concoction and production ranges from the boom bap beats, Caribbean vibes, the dirty south and some pop flavours.

What they actually strive for is far more ambitious and way beyond mere genre boundaries. It’s bemusing, confusing and exciting, and the listener is enveloped in a sound world that shifts at its own pace.

With this one, the trio gives us a glimpse of how life is like in the urban landscape of Harare.

There’s no questioning the calibre and the tone of their operatic, which appears to convey the harsh sounds of the streets whilst keeping the hustle and the party in mind.

Songs like Still The Few and Long Live The Few reiterates the idea of their seldom kingship and most importantly how awesome they are. With tight rhymes spat over the stomping hip hop grit beats the power and minds of these two lyricists remain undiminished. Imagine the Zimbabwean hip-hop of today without their influence.

Famba Famba , which kicks off with a snippet of what happened at ZIFM during the Fix The Fixx dialogue finds the two spitting interchangeably in a Run DMC fashion over a scratched boom bap accompaniment. We couldn’t be more proud of Fizzo doing it the Dj Premier way.

And like their debut, the sophomore is also a beautiful bolt that shows the two could be emotionally accessible. Vasikana Ava, Versace and Gucci and Stuck In The Clouds are love songs that likely to win over many lovie-dovies.

The talented MC Chita appears on Bum Bum where he lends further heavyweight input.It’s a unique party song and expect to hear it in anywhere.

The pop music is filled with songs about mothers and very few-to-non about fathers. So, on Kutaura Neni the two takes a rare chance and did a song for the patriarch that brought them up,  and for that, we give them major props.

And with the country’s current socio-economic and political climate as it stands there couldn’t be a better time for the two to slamdunk this brazen dose of social commentary into the political net.

Bad Boy with Fizzo on the hook bemoans rape and has Tehn and Breezy dictating harsh terms to the perpetrator.

Mamero which kicks off with the President’s speech on corrupted traffic cops tells a story of the regular cat-and-mouse game between drivers and cops.

The climax of The Feeling Ain’t Fear comes to the fore with The Remedy,  a song that fearlessly exposes everything that happening in the country.

Chanting,  “The revolution isn’t gonna stop”, the two exhibits abilities above average emcees ever since, commenting on the politics of the nation without the usual clichés.

They wield rhymes that embody the youth’s restless spirit, establishing a rebellious and a sympathetic tone along the way.

The album also has its fair share of drama-catching humour. On 15 Billion they used a snippet of a phone conversation in which Sniper was offered to perform for $50 before they went on to declare their insatiability when it comes to money.

What’s humorous isn’t Sniper’s issue, but how they played around fifteen billion, a same amount of money that reportedly went missing off the money made at Chiadzwa diamond mine.

There’s also a snip of Olinda’s facebook rant, yes, the album has a lot.

In a nutshell, The Feeling Ain’t Fair is a quality performance with solid production.

A remarkable display of creative unity, it would be fair to view it as the link between hip-hop’s golden past-and- hopefully a vision of its shining and versatile future. It’s executed with a comprehensive flair that caters to listeners both old and new.

If the general consensus has it that their debut The Feeling Ain’t Fair was a plaudit-magnet in its own right, the truth is, anyone who was or wasn’t convinced by it is going to find more issues to take from this one.

Few Kings, Tamy to stage a ‘One Night Only’ show at Club 1+1