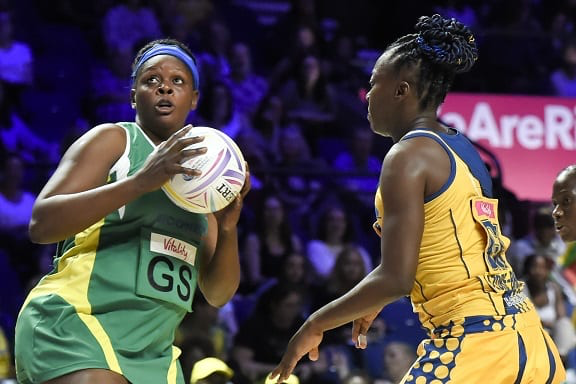 Jani was in fine form in front of goal, as an injury-ravaged Barbados fell to another loss.

Zimbabwe had won the hearts of many neutrals with their performances in the competition so far, and came into the game with the possibility of earning a top-six finish at their first ever World Cup still alive.

By contrast, Barbados had just a solitary win to their name, picked up in their opening fixture of the tournament against Singapore.

This was the first ever World Cup meeting between the teams – both known as the Gems – and it was the Barbadians who made the quickest start, racing into a 4-1 lead early on.

Both sets of shooters were finding the target with apparent ease, and mid-court pressure allowed Zimbabwe – again roared on by their passionate band of supporters – to get back into the game, eventually levelling at 7-7.

The shooters on both sides all had unblemished records as the Zim Gems edged ahead, but it was the strong, composed presence of Jani at goal shooter for Zimbabwe who was becoming increasingly dominant.

Her accuracy, combined with fantastic work by her team-mates in their defensive third, allowed Zimbabwe to push out to 12-8 before Sheniqua Thomas recorded the first missed attempt of the match after ten minutes.

Mistakes were beginning to creep into the Barbadian play, with too many passes being over-thrown and disappearing off the back of the court.

Jani, who ended the quarter at 100%, ensured they were punished as the first 15 minutes finished 17-11 to the Zimbabweans.

The gap remained at six through the opening stages of a scrappy second quarter, but it wasn’t long before Jani was pushing Zimbabwe forward again.

The lead was 23-14 when Zimbabwe suffered an injury blow.

Perpetua Siyachitema suffered a heavy fall and went off to be replaced by Ndaizivei Madzikangwa, who came on to win her 50th international cap.

The change momentarily threw the Zim Gems, as Ursula Ndlovu registered their first missed attempt of the match.

Jani’s still-faultless shooting performance was being matched by the displays by her team-mates across the court though, and the Zimbabweans went in at half time 33-19 up.

The third quarter was marred by an injury to Barbados centre Rieah Holder, who went down heavily and left the arena via a wheelchair.

She was replaced by Amanda Knight, and though she and her team-mates ensured the closest quarter of the match, they still couldn’t stop the service to Jani ending in the inevitable consequence of further Zimbabwean goals.

The Zim Gems ended the quarter having grown their lead slightly – 48-32.

If Barbados suspected their luck was out, that suspicion will have grown during the final quarter, as Tonisha Rock-Yaw and the excellent Shonette Azore-Bruce collided with each other trying to intercept a pass into the goal third, leading to Azore-Bruce also going off injured.

Zimbabwe took full advantage of their opponents’ misfortune to extend their lead throughout the final quarter, chalking up a 66-41 win, as Jani ended with 51 goals from her 53 attempts.

The Zim Gems are now level with Malawi on four points, and play their African rivals in their final Group F game on Thursday.