Dancehall Star Nutty O has announced that he is leaving the Military Touch Movement (MTM) Label.

In an expected move following visible fissures in the Jah Prayzah MTM label the artist said he was leaving ‘purely for growth reasons.’

The relationship between Nutty O and Jah Prayzah seems to have come to an end following Friday’s events in which Jah Prayzah on his official Page decided to stream live a Nash TV gig in which Tocky Vibes was performing while at the same time his stablemate Nutty O was performing in another ZiFM gig which he ‘ignored.’

The move was interpreted by many as an apparant public rejection of the 2020 Star FM Music Awards Best Dancehall artist.

Nutty O in frustration posted something on his age which he later deleted. 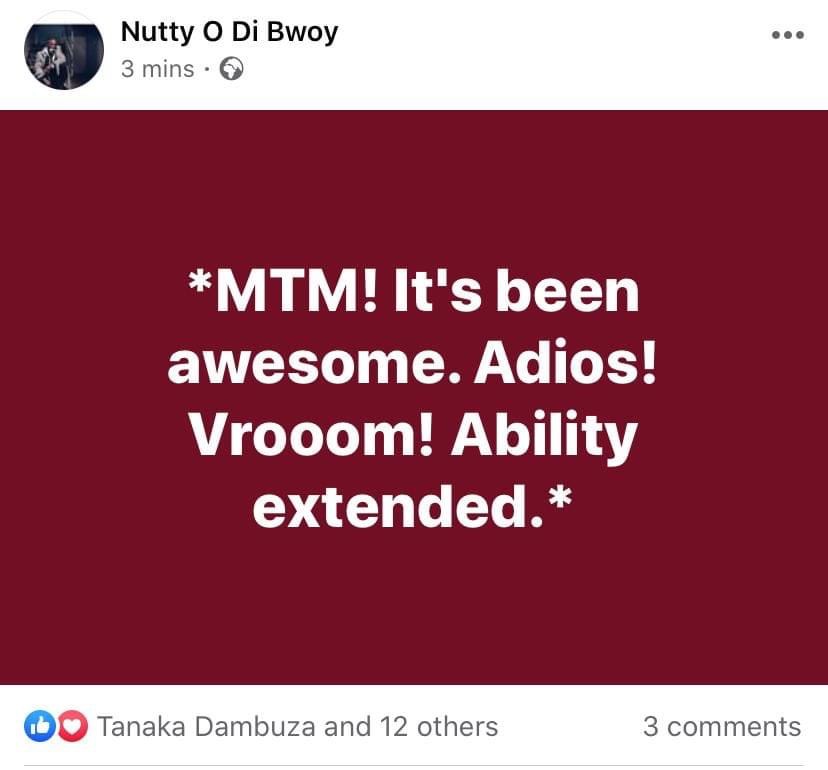 In 2019 Nutty O posted a statement that was interpreted to be aimed at the Military Touch Movement.

He wrote: “The same hand hyping up, same hand killing. It is still the same old story. Black kill black and it’s a stubborn reality.”

However, Nutty O would come and debug the myth by posting that his then Military Touch Movement boss was the biggest artist in Zimbabwe.

He wrote in March: Give Jah Prayzah enough credit and remember Nobody is bigger than him Paden (Home). No argument.

I hope this finds you well and in good health especially in these trying times when the world faces a common enemy: Covid-19. As an entertainment brand we hope that you continue to stay served from the comfort of your homes.

In light of the recent events that have fueled multiple sentiments as well as the speculation of Nutty O’s MTM exit I feel it can only be put to rest with an official statement making clear what needs to be.

Nutty O joined MTM at the fall of 2016 with the official label work commencing in January 2017. This move still remains one of the brand milestones having received the privilege to work alongside a heavyweight talent like Jah Prayzah.

We wish to put it on record that Nutty O will be leaving the MTM arrangement purely for growth reasons. One can only conquer the forests by walking through them.

It will always not be easy setting foot on unchattered ground but it is through exploration that great discoveries come. With everything learnt we hope to continue pursuing the ABX Vision simply summarized as ‘the never ending pursuit of growth’.

We call upon the support of anyone who believes in ABX and what we seek to achieve as a homegrown Zimbabwean brand aiming to carry the national flag to the global stage. Nutty O will not be extinguishing his affiliation with MTM but exploring a different working space.

Keep enjoying the music and don’t forget to share with your family and friends; that’s the easiest way you can help to grow the Nutty O brand.

I have not left Military Touch Movement — Nutty O