Birthday boy Genius Kadungure better referred to as Ginimbi has dismissed allegations that he offered Instagram ladies some money in exchange for sexual favours.

This came after Twitter went into overdrive yesterday following a published screenshot of what has now been established to be a fake email.

In the email, a fake Ginimbi is seen sending a bulk email to various Instagram slay queens and offering them 10 000 each if they slept with him.

Below is the screenshot. 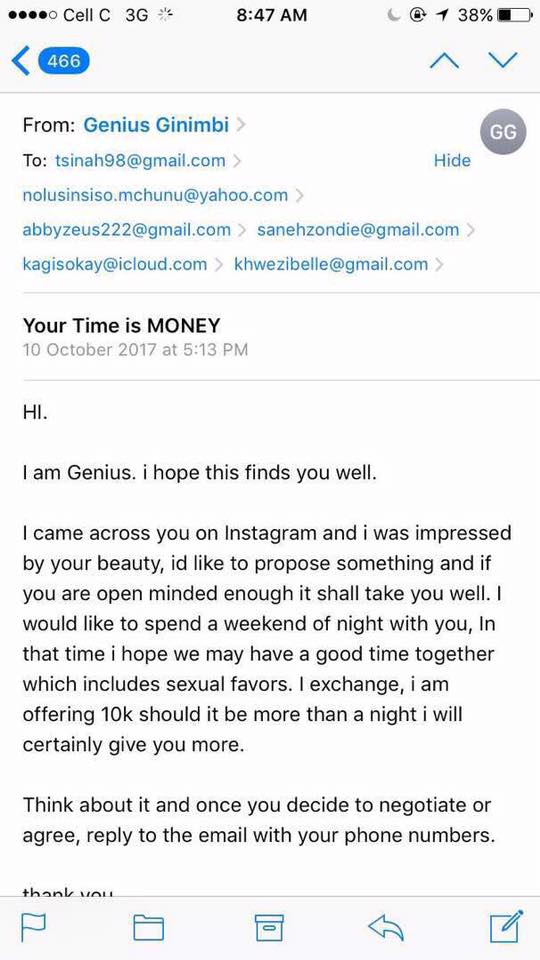 In a statement published on his Facebook page, Ginimbi trashed the fake email and called it a scam.

“I’m so terrified and shocked with the extent how a low lifer would have a sleepless night to scheme, compose and draft such a fake email conversation circulating jeopardizing and tarnishing my image,” he said.

“Firstly I don’t have an email address called Genius Ginimbi and I have never used a Cell C phone operating service hence you got that wrong.”

He said that the perpetrator was trying to get his attention and gain publicity by tarnishing his name.

“Whoever it is that’s trying to get my attention I hope you have achieved your goal and added a few cents in (sic) your kiddy bank. Whatever scam you trying to instigate don’t use my high profile name to gain publicity for I don’t offer money to anyone via email. This is a bogus fraudulent staged email do not entertain it,” he added.